A thrilling dance experience can be yours this weekend! I’ve written a bunch of new music for the Kozmik Keyboard to accompany YOU, while Jacob Larmour speaks inspirationally, and you, of course, dance.

Rain or shine 2-6 pm @ Davie and Bute st. You know, the rainbow walk! Jacob Larmour and I will be on from 3:30 – 4:30 for a fascinating guided experience of the human story.  Not to be missed!

Here I am playing a new tune called ‘Reunion.’ I just discovered the bass function on my Kozmik Keyboard – super fun. I may have overdone it though, ‘cos the arpeggiator broke shortly after making this little video.  hmm…

deep drone from the trombones… Ellen and Andrews’ auditory ovation to the next wash of sound to gently caress your malleus, incus and stirrup to pure ecstasy!

Will you please join us tomorrow?

….here is a harmonious historical recollection of last year’s happening…

As I sit around here twiddling my thumbs still waiting to be over the whole concussion thing…I came across an interesting envelope in my desk. “Hols Costa Rica memories,” in my mother’s handwriting no less. Bless her dear heart! I wrote and played a lot while I was living up in that incredible location, on the Continental divide, Monteverde, C.R.

“I wasn’t sure if I should really mention anything…but a large ape has been coming to me out of the forest, almost nightly, and for some time now. What I like so much about him  is not having to deal with the whole Spanish thing. What is Spanish anyway? you put an ‘ito’ or an ‘a’ or an ‘o,’ or sometimes a ‘dad’ at the end of English word, and that’s Spanish,  pretty much. True there are occasional surprises, like the word “banano.” But think about it, of course a banana is male. Frank and I (he’s so wonderfully direct) often enjoy a kilo or two of bananos together, all in good fun. The locals here prefer them nice and ripe and even feed bananos to their horses.

Then there’s the pig farm down in the valley. I had to go down there to check it out. It’s actually more like a concentration camp. Barbed wire, large grey windowless buildings, dour looking men in gumboots and the cries of the damned, that’s what. I’m so glad I stopped eating bacon. I’ll occasionally get a good whiff of pig shit up here but I still tell  myself it’s paradise.”

here’s a video of a horse eating a banana

Ok – it’s actually the second snow…but it’s SNOW! and it’s still magical and awesome…especially through the eyes of my young Mexican neighbor across the lane who saw snow for the very first time TODAY.  He is about four…I didn’t see him try and melt it on his tongue though…I’ll have to tell him about that one…and snow angels, snowballs, skiing and the whole glorious business.

Oh yessss…if you couldn’t make it to the June 25 Concert ~ now’s your chance…incredible new music from John Korsrud, Hugh Fraser, Bill Runge and moi! It’s a free concert in a public space…fabulous musicians…super music in the great spaciousness…

Here’s a sneak peek at my co-write with Bill Runge, “Lagoon”, which will have its second performance on September 24.

This weekend brings the peak of Summer! We’ve had the fireworks, we’ve had Pride and now the great celestial Perseid meteor show takes over…up to eighty meteors an hour and fireballs will be somehow silently whooshing over our heads this very weekend! I kid you not! So get away from the city lights if you can and enjoy the greatest show off earth…

“great fireballs of fire!” – A guide to the Perseid Meteor Shower

Actually it’s a lot more mellow than that 🙂 Here’s our tune “River of Stars” for your starry enjoyment over this beautiful Summer weekend…how I wish Summer could last forever!

Now for a haiku by Mike:

photons drizzle down in the 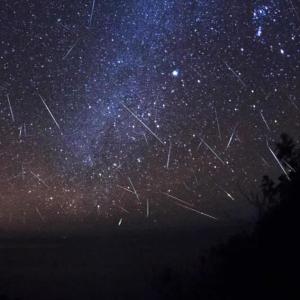